After an abrupt and unceremonious closure last Fall, Blackbird reopened last Wednesday, February 26th, with the slightly altered, and more apropos name of Blackbird Kitchen + Beer Gallery. When I heard they were closing, the only emotion I could say I felt was utter, total, and immense despair. Despondent, [sarcasm: on] I found myself trying my best to enjoy dishes at other establishments, like Ella and Magpie. Tough, I know. [Sarcasm: off.] So when I read that they were reopening, I was happy. No, ecstatic! No, fricking elated! Yes, one of my favorite cold bars was coming back! And come back they have… maybe not with a vengeance, but they have returned.

On a rainy evening, I was greeting with rockstar parking across the street and two lovely men opening Blackbird’s doors for me. I’d heard there were some slight changes to the interior, but nothing too dramatic to make you think you’ve stepped into the wrong restaurant. Along the side wall now sit long, low benches, instead of the high tops that existed there before. Bar seating has been significantly increased with this simple alteration. Also different were the seats in the far back. Inhabiting that space are large, irregularly cut wooden bar height tops.

Seated in the balcony at one of two tables overlooking the space, you truly get a “bird’s eye” view of the place. Seating has also been increased up here, with benches along the back wall. I was presented with more menus than I can count: beer, food, wine, and drinks. Not quite as expansive and obnoxious as The Cheesecake Factory, with the beer selections outstripping the food choices. Yowza! I am not as much of a beer drinker as I am a wine fan, so I was pleased to see the wide variety of beer, particularly local ones, and a selection of ciders; I was sure to find something of interest, and I found many things! 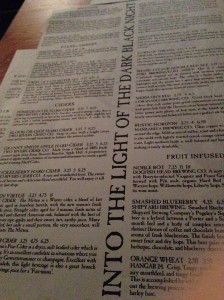 Perusing the menu, I had a hard time figuring out what to order. There are still some of the old favorites like fish tacos and Arctic char, with some new beef additions, including a vegan dish of wild mushrooms and toasted oats. Oysters are still on the menu, but only one kind. I don’t know if this will be a rotating selection, or if they’ll always have kumamotos. I am hoping for more in the future.

Tonight started with some sparkling wine. They have four on the menu, three available by the glass. One of the two we wanted wasn’t deemed cold enough, so an alternative was brought up. Instead of the Chandon, we received a Varichon & Clerc blanc de blanc, which was fine by me.

For food, first up was Captain’s Chowder, a popular holdover from the original menu. Populated with potatoes, pollock, calamari rings, mussels, and clams, this chowder is rife with variety. However, don’t expect it to be overflowing. The broth is delightful, with a slightly smoky flavor given by the clams, which are house-smoked. It’s not too thick, nor too thin, in my opinion. I prefer a brothy soup, so this suited me just fine. My system generally has a hard time with soups like this, but you’ll be happy to know, I had no problems with what I ate. Just an FYI, in case anyone else has, um, issues like I do.

From the raw portion of the menu was the also aforementioned Arctic char. I can’t remember how it was served before, but now it’s sliced ever so thin, and placed on a cream cheese sauce that’s lightly dusted with “everything bagel dust.” The char is topped with black roe. The flavors on this were good, and the textures interesting. I particularly enjoyed the bagel dust for its interesting crunch. 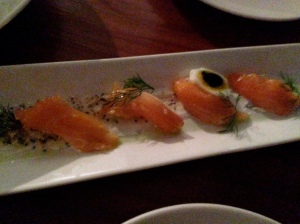 Next was seared Hawaiian butterfish. Butterfish is also known as waloo/walu. It was served with a pillar of daikon with sprouts, some bok choy in a shallow lake of kombu lily broth. I kind of wanted a spoon for the broth! Can you tell I’m a fan of broths and soups?! The butterfish had a nice, slightly crunchy exterior, and was just enough raw in the middle.

After all this, I was still feeling a little munchy. So instead of dessert, I decided to try the grilled Caesar salad. I’d been craving a Caesar for a while, for utter unknown reasons, and this, unfortunately, did nothing to curb my craving. Why? Because it’s not a traditional Caesar. The trimmed head of lettuce itself is slapped on a grill for a little bit, so it gets a really interesting flavor from the grilling. This also means it’s not cold, so you miss that crunch and temperature. It had a too small dollop of dressing off to the side, and barely any cheese. In lieu of anchovies, Blackbird used fried night smelt. I’m not a big fan of whole fish and refuse to eat them. I tried a piece, but the breading was awkward and they’re just  too big for me.

This soft open wasn’t without its kinks. But then again, soft opens never are. I didn’t see any familiar faces from before, not that I was expecting to. The servers need a bit more training on the menu and booze, and I’d like to see more desserts and maybe a pizza or two. But I do like their new bar menu that features nachos, tempura, fish tacos, and a burger. I miss the fries, though, and the other seafood items, since I am pescetarian. I don’t know about a happy hour, but I hope they’ll do one! I also was very irritated when my bill came and I was charged for an amount I saw nowhere on the menu. Turns out, they don’t list the price of a pint, the most common size to order, but include three other sizes.

Overall, Blackbird’s new menu and feel reflect their move away from seafood, towards a more robust feel that can stand up to the beer. I have a feeling this will continue to evolve and change until they can truly hit their stride. But, because Carina is such an innovator, who knows where that will be? I, for one, look forward to seeing how Blackbird 2.0 comes into its own.