Oh, Dad. How I’m so very sorry I never met you until now. Dad’s Kitchen is an amazing, fun, homey place to drink yourself into beer heaven. I had no idea just how extensive their beer selection was until I saw it for myself. Unfortunately, this post has absolutely nothing to do about beer, but I’m sure I’ll partake in their beer at some point, and post a glowingly drunken review. But today, I’m going to posting a glowingly fat review.

With the closure of two of my brunch staples, Restaurant Thir13en, and the eclectic Bows & Arrows, I lost two of my favorite brunch spots in one fell swoop. However, now that I’ve experienced Dad’s, I will most certainly end up there with friends and family.

Receiving a text at 8:30 am on a Saturday may seem criminal to some, but I was awake, and since it was from a very close friend of mine, I decided to take a break from Words With Friends and see what she wanted. And what she wanted to grab brunch there. Awesome! I thought. I’d never been there and had been wanting to give it a go. So, off I went.

Located off busy Freeport Blvd, which is also 21st, in case you’re wondering, parking can be tricky. But try your luck along the residential streets nearby if you can’t get one of the coveted spots in the parking lot directly in front. Oh, speaking of which, there’s a Pilates/spinning/barre/who-knows-what-else studio right next door if you feel the need to work off some of your indulgence at Dad’s, Subway (or not), Freeport Bakery, or Marie’s Doughnuts, all of which, are within twenty steps. Dangerous days, we’re in, people! 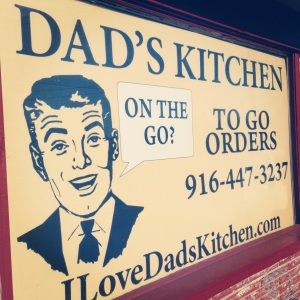 Dad’s has an awesome back patio, which is enclosed and armed with heat lamps for cooler weather and fans in the warmth. I do suppose it also expertly keeps away pesky flies, mosquitoes and other sorts of flying rodentia. A roll-up door separates the bar from the patio, considerably opening up the place. 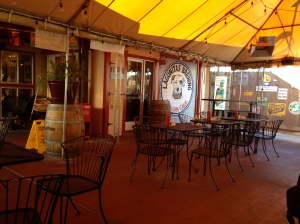 One of the coolest things about Dad’s is that they use grass-fed beef, local produce, free range, organic… pretty much everything a hipster could ask for. This can, however, cause a bit of confusion when the hamburger comes out a wee bit pink in the middle. Apparently this is caused by the fact that the beef is grass-fed and something about the oxidation. I don’t know the veracity of this explanation, but I’m going with it. If any of my dozen readers know the answer, please elucidate!

At any rate, here’s what was on the table that morning!

Coffee (with creamer served out of baby bottles… not quite sure what they’re saying about us who use creamer!) that was really great (I had two cups, and was still able to go to bed that night, miraculously), a mimosa, and a bloody mary(which was spicy, and a generally good bloody) were the beverages, and here are the meals… well, after the photos of the bevs…! 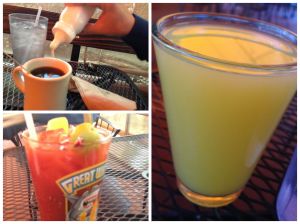 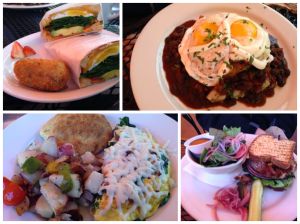 Meatless Marvel: A breakfast sando with hard fried eggs, avocado, tomato, and spinach, stuck to sliced sourdough bread with cheddar cheese and a pepper plant sauce, and served with their signature “breakfast tater,” which is diced potato somehow combined with garlic and/or onion, and fashioned into a large tater tot-looking thing.

Dad’s Gone South of the Border: two eggs, any style (although this was fried), atop their housemade meat or veggie chili (appropriately called “Dad’s Damn Good Chili”), home fries and cheddar, all weighing down on a poor ol’ tostada shell.

Dad’s Burger: This was apparently featured on the Food Network episode of “Diners, Drive Ins and Dives.” And OH-EM-GEE. If I was eating meat, this would most definitey be something I’d be ordering! It’s a 12 oz. patty of aforementioned grass fed beef, that’s encrusted with bacon, and topped with bleu cheese, along with the usual accoutrements of tomato, lettuce, and red onion with an allepo chilip spread. Another cool thing about Dad’s? They’ve got gluten-free breads provided by Pushkin’s, located at 29th and S, although they hadn’t gotten their shipment quite yet when we were there.

Vegetarian omelette: This is a pretty standard omelette, with mushrooms, spinach and tomatoes, with jack cheese and served with homefries and one of their homemade biscuits. I had this. It wasn’t any kind of fireworks-immediately-write-home-to-mom kind of omelette, but it was yummy, cooked well, and just perfect for what I wanted. The homefries are about what you’d expect: cubes of potato with onion, bell peppers, and seasoning. I was a little disappointed in the biscuit; it was rather dry and flat. But, honestly, I didn’t care!

Bottom line, Dad’s is a fun, easy, comfortable place, with affordable food, a great waitstaff, and enough beer to keep a beer-aholic satisfied for quite some time!

Bottom line, if you’re a beer-fan, a food fan, or just a fan of comfy food, come on over to Dad’s! Next up, Mother… then Orphan. Haha.