There’s a new “kid” on the block… and by “kid,” I mean awesome brewery! In a really obscure and off the beaten path lay Device Brewery, a true mom and pop organization that is run by the ridiculously attractive husband and wife team of Ken and Melissa Anthony. And by “off the beaten path,” I mean it. It’s off Power Inn Road and 14th Avenue, which at this point, resembles a forgotten road in the middle of rural Pennsylvania. But, just a block off busy Power Inn lay Device. This part of Sacramento one might consider the “industrial” area. It’s filled with warehouses, manufacturing plants, body shops, and other businesses of that ilk, with an after work crowd who are much more inclined to grab a pint than a glass of chardonnay! In the corner spot, you’ll find this brewery. There’s plenty of parking and a relaxed, comfortable feel to the place, where I imagine there will be a “Norm” and “Cliff” very soon, if there isn’t already.

Acquired in spring of 2013, the small, but comfortable tasting room opened late last year. Serving up a small, but craft selection of IPAs, stouts, amber ale, and who knows what else may be coming, this is the definition of hand-crafting. Now, I don’t go to very many breweries, and I’m sad to say I haven’t even checked out New Helvetia and I know nothing about beer week… there is such a thing, right?! I know, bad Sacramentan, bad Sacramentan! But, please, don’t judge me! I’m a wino, through and through. However, I certainly can tell a bad beer from an average one… and these are anything but average!

When I ventured over there, I had a sampling of one of their two stouts, and a mild IPA. The stout was a bit much for me, as stouts can be, and on the sweeter, chocolatey side, but it was delicious and I would have had a small glass if I’d been ready for dessert… or a stout, I suppose. So I was poured an IPA that was mild on the hop. Unlike my palate for wine: chewy, multi-layered, complex and maybe a bit confusing, I like my beer like my men: simple… aren’t they all? Haha. Seriously, though, I prefer pilsners, witbiers, and the like. I shy away from IPAs, and haven’t met one I’d like to spend the night with. However, I think I could have had a go of it with this IPA. Who knows, maybe my beer palate is moving beyond cloudy, pee-hued stuff. 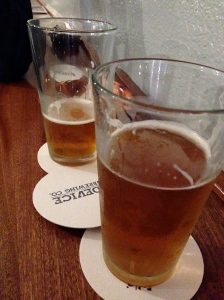 I don’t know what else they plan on serving, but I’m very excited about this place. It’s close to where I work, friendly, affordable, and about as local as they get. As for food, there are only pretzels to be had, however, I did see a party bring in food, so it would appear they’re amenable to that. I don’t know if they plan on, or have the facilities for food service. But check their website for service, as food trucks do make a stop there.

I’m hoping they expand into lighter beers, offering a larger spectrum, and if they could do a good gluten-free beer, I have several friends who would instantly fall in love with them! 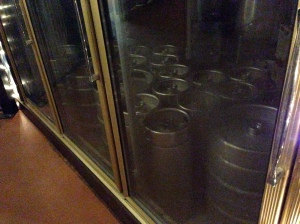