Tuli–>Trick Pony (independent)–>Trick Pony (Broderick)–>Localis (Broderick). Let me just say that I miss Tuli with a vengeance. I also had high hopes for Localis, especially after hearing what some of my foodie friends thought about it. So, I enlisted a major foodie friend (I think he’s my Sac foodie BFF) and we double-dated it.

Localis opened just a few weeks ago, so I’m willing to give it some leeway here, but I’m going to also be brutally honest when I tell you about my experience this time.
Upon entering, they haven’t changed the interior much at all, and it feels like a familiar friend. The chefs are bustling behind the counter and a few folks are seated at the bar. Upon perusing the menu, I noticed there were no pizzas and I hope they do use it. Supposedly it’s one of the best pizza ovens in Sacramento and the draw for Trick Pony’s initial owner, who met Tuli co-owner and chef Adam Pechal when they both appeared as contestants on The Taste. But moving on. I had no issues making a reservation, and for a 6:30 time slot on a Saturday, we were one of the first parties. After being seated, the server told us about some specials, which weren’t on the menu. Then he told us about the chef’s tasting menu, which consists of 5-6 courses, which the chef chooses, with amuse bouches. Excuse me? I think you mean palate cleansers, as you can only have one amuse bouche at the begninng of a meal. But, whatever. Unfortunately, I had neither the time, nor the $77 to spend on the food and $40 on the wine pairing that day. Our server did say that it could be modified to fit a dietary restriction. In my case, no land meat or octopus.

So, the four of us came up with a game plan and made our order. But when we tried to order one of the “not on the menu” dishes, the server actually said, “but that’s not on the menu.” Perplexed, a reply of, “I know, it’s one of the specials you mentioned earlier.” To which he said, “That’s on the tasting menu.” Well, crap. Now two of the four had to figure out what to order instead and try to get exited about that.

But, we were resilient and had a delicious bottle of wine in front of us. The first thing to arrive was the “Bacon and Eggs.” We were told this was delicious and a “must order” item. Fried polenta creates a crunchy bed for the egg, whic was pretty much al yolk. There wasn’t much “bacon” in this, but over all, this was pretty decent. I liked the pea shoots and pesto. 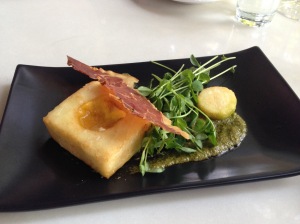 Next came the “Nigiri” of albacore with shoyu, crunchy black rice, and… puffed rice. Yes, like the kind you got in that huge bag on the bottom of the shelf in the cereal aisle when you were a kid. However, that did lend a nice textural variation, so I’m not going to bag on that too much. The fish was good, and the pickled cucumbers (there were two different kinds) were nice. 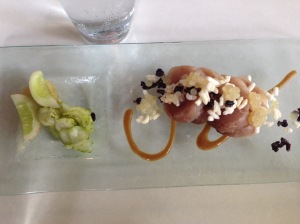 For the entree, I decided to order the small plate of “Corn and Rice” hearing that this, too, is a must have. This was laughable. I was expecting something a little more robust than this. But it was okay. It sure as heck wasn’t $12 okay, but it was decent. But I felt like I’d just eaten air. In fact, I kind of did, considering a third of the dish was foam. I know, you’re probably thinking that I didn’t order enough. Well, at most places, two small plates are usually enough. And when you look at the cost of them, a combined $24 worth of food should be plenty.

The other three dishes were “Surf and Turf” times two, and the “Steak and Potatoes.” Here they are: 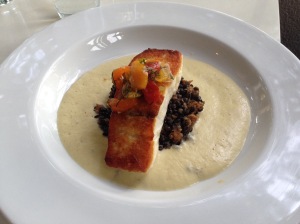 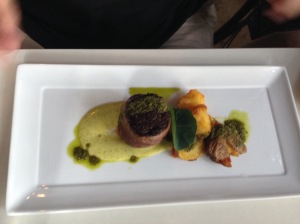 The Surf and Turf was (slightly overcooked) halibut with black lentils, and the “turf” of this dish was crumbled chorizo, which I had a hard time actually finding to pick out when I tasted this.

Meanwhile, the Steak and Potatoes was probaby the best thing, according to my friend, since I didn’t try it.   Although the portion was so tiny, this should have been a $15 small plate.

Now on to dessert. It was a hot day and when we read there was a watermelon and mint dessert, it sounded amazing. Well, it wasn’t. This provided the second laughable point in the evening. The blueberries were pickled. Yes, pickled. I like almost anything pickled, but these were just plain wrong. And the watermelon consisted of those three tiny cubes, barely bigger than the blueberries. The panna cotta was maybe a quater of a cup, and the gelato was about a teaspoon size. At $10 I felt like I’d been scammed.

All that being said, I would like to give this place another shot, especially since other friends have had good experiences, although they weren’t there as some joeblow off the street, but chefs and other folks Localis clearly wants to impress.

So, in closing, here are my thoughts. Way, way over priced for what you get. They may have changed this since I was there a couple weeks ago… At least, I’m hoping. Don’t go there hungry. I ended up having to eat a couple hours later. The battle cry of the night was “foam is not food.” The ambience is still lovely on the patio, and I suspect service and experience are different when you sit at the bar, as is the case at many restaurants. The food wasn’t as great as I was expecting, but again, sometimes it can take a while to work out the kinks. The service was slow, but non-intrusive. My two biggest complaints were that the server was very unclear when talking about the menu, and it took over 20 minutes to get our check after we requested it.

Bottom line: It’s overpriced, under portioned, and the flavors are just slightly off for me. I left feeling a bit ripped off. But again, I will give it another shot another day down the road. 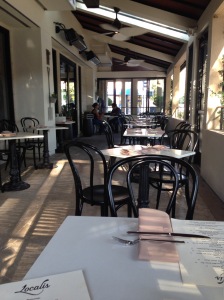 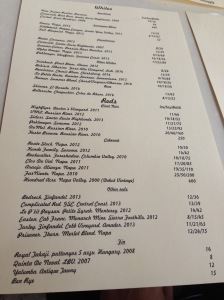