As if Sacramento needed another sushi joint… but we need Lou’s. We need Lou’s like a drunk needs a forty. This place is spectacular and after just one visit, has become my favorite place for sushi. It’s neighborly, friendly, and comfortable. Lacking in distractions in the form of televisions, guests are encouraged to actually talk to each other! Gasp!

Lou’s has taken over the corner of P and 28th previously occupied by Una Mas. Is that chain still around? At any rate, it is tiny, but with high ceilings and some cool industrial art adorning the walls with changing LED lights behind said art, it doesn’t feel claustrophobic.

Starting off with miso soup is always a good idea, right? And this would be no exception. It was unlike any miso I’d had at a sushi joint. Packed with miso, seaweed, and tofu, it wasn’t your average, run-of-the-mill, watery miso you’d get at a lesser place.

I had the very good fortune of landing here on a Tuesday, which is all day happy hour. Yes, you read that right. Rolls, drinks, and all kinds of goodness await you at 8:30 on a Tuesday night. I was the lucky recipient of the BTS: Grilled albacore in a ponzu sauce and a healthy sprinkling of jalapeno peppers. And no, I have no idea why it’s called the BTS since none of the ingredients actually start with a “B,” “T”, or “S.” But who cares. This thing is delicious. 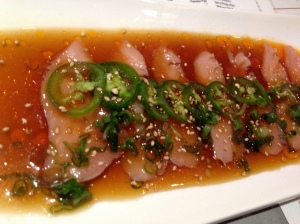 As for the roll, I tried the Midtown. Panko crusted fried spicy tuna and avocado, with sriracha, sweet sauce and some scallions. I mean, seriously, can you go wrong with those ingredients? Well, I’m sure you could, but Lou’s didn’t. The tuna was quite spicy, but not over powering. However, more delicate [insert: wimpy] palates may prefer a less capsaicin-laced roll. 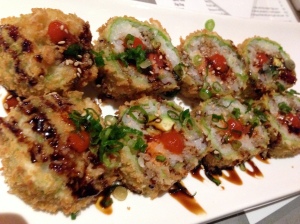 May I suggest the Roy-G-Biv, which is a nerd’s way of saying “Rainbow Roll.” Not a nerd, you say? It’s the colors of the rainbow: Red, Orange, Yellow, Green, Blue, Indigo, Violet. There. Now you can’t say I only ever talk about food. Or the classic California Roll. This isn’t a boring California Roll, however. Lou’s uses real crab, not that weird, fake, stick-meat you commonly find occupying the space real crab should be.

As a standard practice, I always order agedashi tofu. Somewhere along the way, I decided this was going to be my litmus test for good sushi which is totally ridiculous, since it’s neither raw, nor fish. In case you’re unfamiliar with agedashi, it’s pretty much just fried tofu. Can’t screw that up, right? Well, you’d be surprised. The way it’s served can vary with each restaurant. Lou’s places the tofu in a warm soy broth and tops it with freshly grated ginger and daikon radish. The key to good agedashi, IMHO, is how crunchy it is, and when you bite into it, how much grease gushes forth to dribble down your chin, causing a path of third degree burns. Just wait until it cools down, you say? Well, that’s boring and I’m a “risk taker.” I’m happy to report, Lou’s was just how I like it. The broth wan’t too salty, nor was there too much ginger, another problem that can afflict agedashi.

Also on the table (at a different time… I love sushi, but even my tummy has limits!) were the Markimoto: spicy tuna with asparagus and albacore, sprinkled with ponzu sauce and scallions.

Also were mushroom egg rolls, perfect for anyone who doesn’t want a greasy pork eggroll. 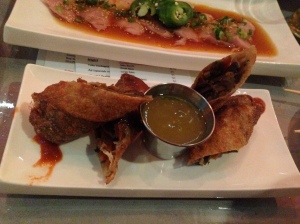 Their nigiri is also the best of the best. I enjoy having a piece of salmon or tuna after rolls, and almost had two orders of their salmon that night. It was buttery, smooth, and flavorful. Wherever they get their fish, I want a piece of that action! Oo, I also want to try their seafood nachos, which I hear are spectacular.

Lest you think the name Lou was chosen by a Japanese guy who idolized Lou Reed and landed on that name while trying to find an American name, Lou looks like he’d be more at home in a pizza joint in Brooklyn, but make no mistake, this guy knows what he’s doing. He even has a great sushi chef with the most un-decidedly non-Asian name of Igor (no, it’s pronounced Eye-gore – name that movie), who is also a huge San Jose Sharks fan.

I absolutely LOVE Lou’s and am willing to wait the 30-45 minutes it may take to get a table or sit at the bar at peak hours. What Lou’s doesn’t have is other Japanese cuisine, like soup or teriyaki, which is fine by me. They do sushi and they do it better than anyone. They also happily do take out. I got enough for my family of out of towners and it was perfect.